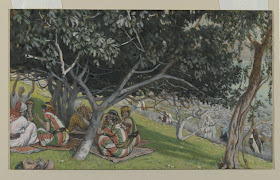 John 1:45-51 You Will See Greater Things Than This

In the epic novel Les Miserables, Jean Valjean (known as Monsieur Madeleine), arrives in the city of Montreuil-sur-Mer and is met with some skepticism. But, as Victor Hugo brilliantly explains: “In the lapse of time, all opposition ceases. At first there had been, as always happens with those who rise by their own efforts, slanders and calumnies. Soon it was reduced to satire. Then only to wit. Then it vanished entirely. Respect becomes complete, unanimous, and cordial.”

Philip found Nathanael and told him, “We have found the one whom Moses wrote in the law, and also the prophets, Jesus son of Joseph, from Nazareth.” Skepticism is often followed by sarcasm, “Can anything good come from Nazareth?” But Nathanael discovered that where God is present, truth follows and leads to a life changing experience. How did this all come about? Simple: “Your friends make known, O Lord, the glorious splendor of your Kingdom!” (Ps 145:12) “Arise, shine [Jerusalem]; for your light has come, and the glory of the LORD has risen upon you!” (Is 60:1)

Make known today the glory of the Lord, and “you will see greater things than this.” What will you see? God’s Truth, Goodness and Beauty! Start with nature, look at creation, from top to bottom, from the inside out, from the angles of time and eternity, and you will see all its beauty and all its goodness. Look at life, from every angle, from creation to redemption, from loving to beloved; birth and rebirth; as given and blessed, and you will see all its beauty shine and all its goodness radiate. “The Lord is just in all his ways.” “There is no duplicity in him.” “Amen, amen, I say to you, you will see heaven opened and the angels of God ascending and descending on the Son of Man.” Joy does not consist in seeing something new each day, but rather digging deeper and deeper in the daily mysteries that surround us. Nathanael saw a man walking and talking from Nazareth. By all accounts, it was not a striking encounter, but neither was it a chance encounter. It was providential. Who was unknown became known. Who was foreseen became seen. The Son of man, the God of the prophets and patriarchs, made himself known to the son of Adam, and he believed. The great “Unknown” has always baffled atheists and agnostics who calmly claim that they know nothing about Him, except for the fact that they know that all the gates are locked. Chesterton, as well as logic, would respond that they do not know enough about the unknown to know that it is unknowable! Begin to see, wherever you are and in whatever you are doing, the beauty and goodness of the Lord. Nothing is coincidental. Nothing is by chance! Nathanael was under a fig tree at the right moment and in the right place. But his entire life was always at the right moment and in the right place.

Today, let us dedicate ourselves as Philip did, who found Nathanael, to make known to all our friends, the glorious splendor of God’s Kingdom. For the Son of God, the King of Israel, reins wherever the human heart ascends to the One who called us out of darkness, and into his own wonderful light. This Way, through His Light, will we see things greater than, and beyond, the limits of the human eye, Only this way, will we see “greater things.”