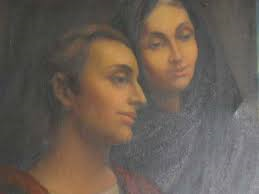 The Transfiguration of Faith

(Click here for readings)
We did not follow cleverly devised myths
when we made known to you
the power and coming of our Lord Jesus Christ,
but we had been eyewitnesses of his majesty.
For he received honor and glory from God the Father
when that unique declaration came to him from the majestic glory,
“This is my Son, my beloved, with whom I am well pleased.”
We ourselves heard this voice come from heaven
while we were with him on the holy mountain.

A few weeks after his conversion, St. Augustine and his mother St. Monica started to return home from Milan, filled with joy. Like Simeon seeing the Messiah at the end of his life, Monica, after waiting all her life, had finally witnessed the conversion of her son at 32. After this momentous occasion, she knew that her life, one of so much anguish and expectation, could finally conclude peacefully. On her way home, she and her son experience a vision in which the two of them transcend the earth, bask in the light of God, and feel a heavenly kind of peace. Soon after this event, Monica passes away at Ostia just before they take the boat to return to North Africa. Although she does not reach her hometown of Tagaste, she does, in a sense, make it home: her home in Heaven.
The vision that the saintly mother and son experience relates to the vision of the transfiguration of Jesus that Peter, James, and John behold. This experience does not mark the beginning of their faith journey, nor the end, but a special kind of turning point in the middle--a point in their ascent that separates the gentle incline of inquisitive faith to the steep climb of tested faith. Before Peter and the others see Jesus appear with Moses and Elijah in a cloud of light, they had only followed Jesus in a physical manner, hearing His words, seeing His miracles, trying to understand Him, who He was, why He had come. Earlier, God had allowed them to have a small glimpse of Jesus' divine nature; Peter distinguished himself by declaring preternaturally that Jesus is the Son of God. However, their faith at this point still rested in a tentative state. To withstand the horrors of Jesus' crucifixion, these three leading disciples needed to visibly see what they had only verbally confessed; the truth that had reached their minds needed to sink into their hearts. Once they see Jesus transfigured; they know in their hearts that Jesus is God, the second Person of the Holy Trinity, the King whose "dominion is an everlasting dominion that shall not be taken away." Similarly, Augustine's vision sheds light in his heart that he found the Truth, which before he had surmised, but now actually sees. Like the Jesus' first disciples, Augustine must do more than follow; he must lead.
Peter recalls the event of the Transfiguration as a way of explaining the meaning of faith. Faith has two key elements: belief and trust. Belief entails certain activities of the mind, things like logic, proof, definitions, and analogies. Most converts normally start in this state of belief. They learn the creed, reflect on dogma, observe the liturgy, read the literature, and examine available pieces of evidence. Like children seeking to understand their environment, people who first enter the Christian faith have many questions, many objections, and depend heavily on those with more experience. Eventually, this belief must develop into something more substantial: one must decide whether accept the Christian life, or reject it and find another kind of life. Faithful Christians must not only believe but actively trust in their Lord and live out His Way. Trust ultimately dwells in the realm of the heart, which inspires the mind to think, the body to act, and soul to live. The transfiguration signals the reality of Christ's spiritual children finally entering adulthood, allowing them to act with confidence and build on a commitment forged by trust.
Once fortified in his faith, Peter did not rest on this accomplishment but took on his responsibilities with unprecedented zeal and alacrity. Even Jesus Himself had to temper this disciple's enthusiasm when it was exhibited in his foolhardy plan to save his Savior from crucifixion. Before he could save others, Peter would have to cool his burning ardor with wisdom and patience; for, contrary to conventional opinion, Christ did not preach a blind faith grounded in emotions and premonitions, but a seeing faith illuminated by reason and truth. As Peter allowed Christ to guide and instruct him, he could put aside the "lamp shining in a dark place" and allow the new day to dawn in his heart. As a result of his devotion, his heart was transfigured. Peter likewise instructs other Christians to hold fast to the lamp of the gospel, and open their hearts to Christ's transfiguration.
While modern Christians may not want to imitate Peter's rashness, they should imitate his faith. Christ chose Peter as His rock because of Peter's faith. Only a faith as strong as Peter's could sustain the Church in its infancy. The genius of Paul, the prophecy of John, the charity of James, all first relied on the faith and leadership of Peter. Like Atlas, Peter shouldered the burden of external persecution and internal conflict with superhuman strength of character. Humble yet resolute, Peter attributed his accomplishments to Jesus Himself, not any golden argument or attractive mythology. He went beyond the point of belief into trust, and never looked back. In the same way, Christians of all ages must make this decisive step and trust in the Lord, making real the virtue of hope, and putting to action the virtue of charity.
Posted by Fr. Alfonse at 1:16 PM