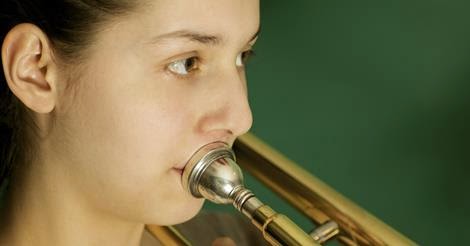 Wednesday of the Fourth Week in Ordinary Time

(Click here for readings)
By SOPHIE DRUFFNER
Jesus departed from there and came to his native place, accompanied by his disciples... He was amazed at their lack of faith.
"Thursday of the Do you believe in God?”


The assistant orchestra director stands in front of the Honors Orchestra, asking us the all-important question. She is asking us this question because we are playing religious music, written by a composer who was deeply in love with God, and she wants us to understand the attitude in which the composer wrote it. Looking down at my plaid skirt and saddle shoes, there seems to only be one answer: “Of course.” Didn’t I go to mass every weekend and participate in the prayer before every class and advisory? Didn’t I talk about religion and morals with my friends, discussing different viewpoints and situations? Didn’t I believe in God?


Just as all this is running through my mind, another student says: “Sometimes. It’s kind of off and on.”


The gift of being open-minded is about stepping into the other person’s shoes, imagining what they are feeling and their prior experience. So I stepped into this student’s shoes, and it didn’t take me long to figure out why he had replied “Sometimes.” As I walked down the hallway after class, I asked myself if I believed in God, right at this second. I asked myself if every single time the priest held up that little wafer that I believed that God was present within it. I asked myself if I believed that he was out there right now, at this very nanosecond, just being Himself. And it was much harder to say “Of course.”


Again, in the dining hall, I was talking with my friends about something another classmate had said, and everyone laughed. Although I giggled, I asked myself again: Do I believe in God?


As I fixed my hair in the mirror before class (a usually fruitless task), I asked myself a third time: “Do I believe in God?” “Right now?” I responded. In the restroom, in front of the mirror? And it was a little harder to say “Of course.”


You see, for me, believing in God was a question for theology and philosophy classes (“The possibility that there is not a God does not disprove the possibility that there is a God”), for school masses and chapel. It was a question of beliefs, beliefs which I didn’t think about at every moment of every day. God was there whenever I needed Him because that was the way I viewed our relationship. When I didn’t need Him, I didn’t think about Him. I didn’t think that He wanted me to; after all, he was too busy looking after the sparrows and the seven billion others in the world.


And then it was school mass, and the priest held up the bit of flour and water and said “This is the Body of Christ.” It is so unbelievable that this was the same wafer that martyrs died for, that Jesus died for, that this was truly the torn and bloody Body of Christ taken down from the cross over two thousand years ago. When I lifted the Cup to my lips, I imagined myself touching my lips to the wounds of Christ, the same blood shed now that was shed over two thousand years ago. It cannot be scientifically proven; it is not a theory backed up by studies and evidence. Yet it is faith, backed by the reason that within Christ’s very self was the link between Heaven and Earth, for He was wholly divine and wholly human. Christ, both fully human and fully divine, told us that this Bread was his Body, that this Wine was his Blood; and for that reason, it must be the ultimate truth.


Remember how much a paper cut hurts, and how so much more a scar from surgery pains one? The Son of God loved you so much that he endured a myriad of papercuts and innumerable scars because He loves you so much. He wants so much that you think of him almost every second,  that you pray without ceasing, that you show a huge amount of faith and believe that there is more than death. And he wants your faith in works, not just empty “Amens,” spirited hymns, or the Creed proclaimed loudly. He wants you to constantly ask yourself that, if you believe in God, if what you are doing is in accordance with his way of love, if what you are doing is truly Christian. Even if you do not believe in the saving death of Jesus, if you are Muslim or Jewish, you can ask yourself, Am I doing what God wants me to do? And any faith tradition can ask themselves the question: Are my actions following the teachings of my faith tradition? Am I honoring others by my actions? (Hindus believe in many gods with one ultimate reality, and generally, Buddhists do not believe in a personal God).


Are you telling the truth, are you truly listening to a person and giving them the full dignity that they deserve, are you defending a person’s right to life, liberty, and happiness, are you stepping into someone else’s shoes…on all issues?


Do you believe in God?


He, the Person who created your first neuron, walks with you. He is above you and beside you, to the right, and to the left. He is watching your back and he knows where you placed things before you lost them. He is your partner and he is always there. Touch your lips to the wounds of God the Son, imagine His pain, imagine his Sacrifice, and remember to “pray without ceasing,” in your every syllable, in your every hand gesture, “for God so loved the world that he gave his one and only Son, that whoever believes in him shall not perish but have eternal life” (John 3:16)
Posted by Fr. Alfonse at 10:26 AM