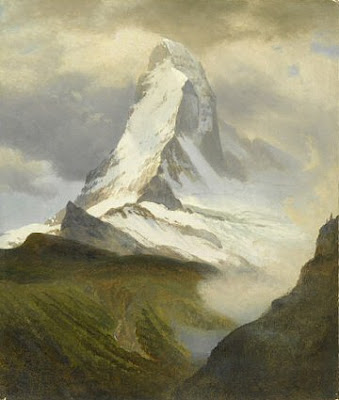 Can you love someone and still break a commandment? No. Even the Lord of Love directs his disciples to observe the Commandments - even the smallest letter or the smallest part of a letter of the law. There is no love without justice and no justice without forgiveness.

Freedom without responsibility is a disaster! I learned that lesson on a ski trip to the Matterhorn ski resort in Switzerland. We took a group of international students in the middle of August to go ski. Did you say, August? Yes, so you can appreciate how high up we were. Four thousand four hundred and seventy eight meters high! As we approached the summit, I looked down and was seriously frightened of the prospect of skiing. First, the air was thin. Second, I was chaperoning a group of high school kids I didn’t even know. Third, some of the kids had a disregard for rules and regulations. Keep the Commandments, says the Lord, for they are a prescription for good living.

The doors of the gondola opened, we put on our skis and we were ready to go. Immediately I noticed the thin air. So did everyone else. I told my group to stick together. But as I was saying these words, five kids went under a thin yellow rope and took off, heading towards the bottom. “We’ll see you at the bottom Brother Alfonse.” I didn’t even have a chance to stop them. Off they went, and unknowingly heading towards a one thousand meter cliff. The leader of the pack was a rebel. He had given me so much consternation the night before that I punished him by making him carry in his backpack all the peanut butter and jelly sandwiches. It was providential. It saved his back, if not his life. He took off in front of the group, full speed ahead, and looked back and told the others, “I bet you, you can’t catch meeeee.” That’s right. He disappeared. It was a miracle that the others didn’t fall off with him. It was a miracle that he survived. Two rescue helicopters had to come in and save his life. He fell right on top of a slab of rock that was sticking out of the cliff. He fell on his back and was saved. The sandwiches were not so lucky.

Later, I asked him what he was thinking or saying as he headed towards the bottom. He told me that he promised the Lord everything if he would just give him one more chance. That’s when he stopped falling.

The greatest in the Kingdom of God are those who obey and teach the commandments of the Lord. “Take care and be earnestly on your guard not to forget the things which your own eyes have seen, nor let them slip from your memory as long as you live, but teach them to your children and to your children’s children.” (Dt 4:9)

This story is so unbelievable and yet, one high school student that was on the trip was from Dallas. He attended the Highlands School. When I arrived there five years ago he came up to me and asked me if I remembered him. I told him no. He looked at me and simply said, “I was at the Matterhorn.” He knows. So do I. How can we ever forget?

The temptation will always be to do what is easy, comfortable and selfish. The Lord's commandments can be summarized in the following way: Do what is right; do what is good; do what is holy. In this way, the Lord will be with me in times of trouble for I will be with him in paradise.