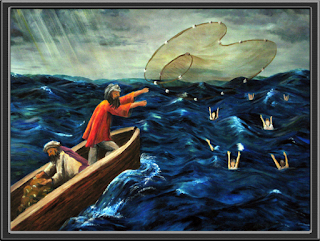 Luke 5:1-11  Peter’s Hell
(Click here for readings)
Simon said to Jesus, "Master, we have worked hard all night and have caught nothing, but at your command I will lower the nets.”  When they had done this, they caught a great number of fish and their nets were tearing…When Simon Peter saw this, he fell at the knees of Jesus and said, “Depart from me, Lord, for I am a sinful man.”  Jesus said to Simon, “Do not be afraid; from now on you will be catching men.”
Do not be afraid.  Here are those words again.  Why do I fear so much?  When do I fear so much?  I know when:  every time I lose control or when someone else takes control.  I am a control freak!  I want to control everybody and everything:  my day, my job, my boss, my friends, my destiny, my wife, my husband, my children, my life and my death.  But imagine for a moment a dog trying to control its master.  Looks pretty silly.  This is how it must look every time I try to control God.  Pretty silly.
And worse: control often leads to the fine art of manipulation.  Friends get burned.  I get burned.  Control freaks come to an end just like a power outage!
Depart from me.  Peter loved the Lord.  But his love was elementary, far too simplistic; too black and white.  “Depart from me, Lord”.  I am no good for you.  Peter was afraid because he could not control the situation.  He understood the situation.  If he could not control the catch, he wouldn't be able to control the Lord.  And if he couldn’t control the Lord, he wouldn't be able to protect the Lord.  He felt like the burden was too much.  He felt the pressure to high.  Depart from me Lord.  I am a weak and sinful man.
Peter understood the situation.  What he didn't understand was the Lord.
We know not what we ask for. But what Peter was asking for is what many of us ask for:  to be left alone.  When Peter told the Lord to leave him, he was basically asking the Lord to send him to hell.  Oh, the heartfelt and confusing things we say!  Of course Peter knew not what he was asking for.  But every time we ask the Lord to depart from us, we are asking Him to send us to hell.
It’s time we exit the illusion of self-sufficiency and discover and accept one’s own needs:  need of others and God – His forgiveness and friendship. (Pope Benedict XVI)
A while back, at a retreat in Lubbock, a young lady told me they were seeking evil upon God!  I asked, “Are you sure you know what you are asking for?”    She stood there unresponsive.  I continued, “Did you ever ask yourself why every time you wished evil upon the Lord, evils fell upon you?”   This individual had suffered greatly for her sins.  She knew what I was talking about.  “Have you figured it out yet that every time you try to crucify the Lord, you end up crucifying yourself?  Do you know why?  It’s because you were created in the image and likeness of God.  What you do to Him, you end up doing to yourself.”
I am a sinful man.  Why should I not be afraid of the Lord when I feel like my sins have taken control of me?  How can you say I should be at peace and my rest tranquil when my life is falling apart?  How can I not worry? Why should I not be filled with stress, or anxiety or even panic attacks?  Why should I feel confident in God when I feel no love?  Be still.  Be silent.  Our peace comes from the Lord’s response to Peter’s insistence.  Peter is no different than me.  He was a sinful man.  I am a sinful man.  He was a useless man.  I am a useless man.  Peter was a simpleton.  I am a simpleton.  He was a control freak.  I am a control freak.  And still…the Lord made one thing very clear to him and that He would like to make very clear to me:  There are many things that I will do.  But I will never depart from you!
Departing from a bad situation is not something the Lord does well.  Love is very different from manipulation.  It asks for nothing in return and get’s more than it ever bargained for.
With a little faith, Peter’s hell turned into Peter’s glory.  He even stopped failing as a fisherman.
Posted by Fr. Alfonse at 8:19 AM