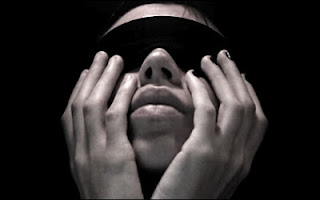 Luke 9:18-22  What you see and don’t see…
(Click here for readings)
Once when Jesus was praying in solitude, and the disciples were with him, he asked them, “Who do the crowds say that I am?”
It was bound to happen.  After spending three years with His disciples, Peter finally figured it out.  Actually, the moment had arrived for him to figure it out.  The Holy Spirit had enlightened his heart and mind to know that Jesus is God.
Now, all the Apostles know who He is.  The Word is out.  Actually, the Word has finally materialized.  What I find remarkable is how long it took them to realize it.  Moms and dads:  Isn’t it remarkable how long it takes for your son or daughter to figure out that you truly love them???  [Sorry, I had to throw that in there!]
The point I am trying to make is the following:  Although the Apostles spent days and weeks with Jesus; although they saw him and heard him constantly, it was not enough to know Him.  It still took the Heavenly Father to reveal Him.  Faith is a grace.  And no matter how often the Apostles saw the Lord’s face, it still took the Father’s grace to reveal His Son to them.
The same holds true today.  No matter how hard a Christian tries to convert someone to the faith, it still takes God’s grace to reveal His face to them.  We convert no one.  We simply draw them closer to the Lord.  It is the Lord, and only the Lord, that can make the blind see, the deaf hear and the dumb believe.
And just when we think we know Him, He slips away from us.  The Lord will not be controlled.  Unlike us, He will not allow His friends to distort Him, confuse Him, demean Him, twist Him or change Him.  He will not be manipulated.  He will not allow Himself to be placed in a test tube and experimented on.  Peter discovers this quickly, and is reminded ferociously to let God be God.  Let the Lord do what He must do: “the Son of Man must suffer greatly and be rejected by the elders, the chief priests, and the scribes, and be killed and on the third day be raised.”

Although Christ did not allow others to manipulate Him, He did allow them to define Him.  When His enemies tried to twist Him, He did not change.  When they tried to bend Him and break Him, He stood tall.  Though Judas' betrayed Him, He would not betray his people.  He accepted Peter's denial as he accepted his sorrow.  He was saddened by Thomas' doubt but never doubted His Apostles.
What you see is what you get.  How can I understand the Lord?  Get a bigger brain!  Sorry, but it is true.  Can you fit the entire ocean into a lake?  Can you fit the entire world’s knowledge into your head?  Every day is a learning day.  Every day we are learning more and more about the world we had nothing to do with.  So how can I believe in the Lord?  Use the brain that God gave to you.  But that is not enough.  For starters, you must receive the Lord’s grace.  How does one receive grace?  By asking for it.
What you see is what you get, right?  So does that mean “What you don’t see is what you don’t get?”  For some people it is.
Yesterday I got into a debate with an atheist.  I published one of his comments and responded to it.  But then I refused to publish anymore because the atheist turned into a Ranter [A Ranter is someone who spews out his thoughts without thinking.]  In his recent comment (which I did not publish), he wrote:  "People are animals.  Read a biology book for a change."  Ahh yes, quick to judge…If he only knew how many science books I had to read in my life, especially while I was earning my Master of Science degree at RIT!  But maybe his advice to me reveals his limitations.  Maybe that’s his problem, that he never read anything other than a biology book.  And of course, if that is all you know about being human, then you might begin to believe that that’s all there is to being a man or a woman.  What you read is what you know, right?  But if he ever picked up a book of poetry, then he would begin to see some human beings as more than animals.  He would see them as poets.  And if he picked up some music and played it, then he would see some human beings as more than flesh and bones,  he would see them as musicians. And if he ever picked up the Bible and read it, then maybe he would see Christianity as different from other religions; and God as different from “god”; and Christians as evolved human beings who love their enemies and forgive them seven times seventy-times.  If he did any of these things, then he might very well begin to see humans as aliens more than as animals.  And he would be right!
What you see is what you get.  What you don’t see is what you don’t get!
For the longest time, the Apostles only saw a man, Jesus, standing next to them.  What they couldn’t get is how He could love them so much.  Eventually they did, and were blinded by the light.
Posted by Fr. Alfonse at 9:13 AM