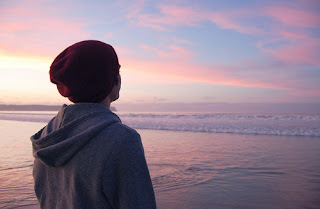 John 20:19-31  Why Do We Doubt?
(Click here for readings)
Now a week later his disciples were again inside and Thomas was with them.  Jesus came, although the doors were locked, and stood in their midst and said, “Peace be with you.”  Then he said to Thomas, “Put your finger here and see my hands, and bring you hand and put it into my side, and do not be unbelieving but believe.”  Thomas answered and said, “My Lord and my God!”
Today is a special day for me.  At this very moment, I am writing my 1000th meditation!
Way back in June of 2010, I decided to start a blog.  I started it because I wanted to be held accountable to an aspect of religious disciple that had always been good to me:  daily meditation.   A few people I know doubted as to whether or not I would be able to do it daily, especially now that I was working as a diocesan priest.  I had my doubts as well.  But after more than two years, I’ve been pretty consistent with it.  I’ve missed no more than twenty or thirty meditations.
We may doubt ourselves.  We may even doubt others.  But who we should never doubt is the Lord.  What I have realized over time is that the more faith I have in myself, in others and in God, the more evidence I gather that supports all three.
A few days ago, I hit another milestone:  over two thousand subscribers.  Who would ever have imagined?  Not me!  But I’m glad.  So many people come up to me, either before or after a wedding or funeral or just a daily Mass to thank me for my meditations.  They ask me how I do it and how I come up with so much to write about.  I tell them that my daily blog has made me a better listener, a better reader, a better writer, a better observer and a better priest.  Of course I still need to improve in all of them, but I think I am getting better at them.
Although I am pleased with all the results, I have to admit:  it’s been getting harder and harder to do the meditations.  I have to remind myself very often of my original purpose and ultimate goal:  to be faithful to my prayer time, to my daily meditation.
It’s very easy to stop.  It’s very easy to just give up.    And far too often we give up before we ever got to what we wanted to be or where we wanted to go.
I know a child who claims to be an atheist.  Now, to be an atheist means to be certain there is no God.  I don’t know about you, but I find it striking that someone could be so certain of such a big thing and at such a young age (10 years old).  But maybe this child’s “certainty” has nothing to do with scientific evidence but rather with a lack of evidence of God; or more specifically, a lack of evidence of God in their life and in others.
Thomas was not there.   Again, I don’t know about you, but I can personally say that I have had moments in my life where I felt like I was “left out” even excluded from the joy experienced by others.  I think this was how Thomas felt.  Let’s not fool ourselves; the Lord knew Thomas was missing.  So why in the world did Christ not show up when all the disciples were gathered together?  I don’t know.  Only God knows.  But what we do know was that nothing short of seeing God “face to face” would be sufficient for Thomas.  The eye witness testimony given by Mary Magdalene was not enough.  The unexpected joy and peace of the others disciples was more irritating than satisfying to Thomas.  It’s logical:  nothing is ever enough to satisfy a hurt heart.
Thomas had a problem with God, but it didn’t have anything to do with “certainty”.  Rather, it had everything to do with a lack of evidence of God in his life.  And that left him with a broken heart and a confused mind.
Don’t we often judge others from a skewed point of view?  Don’t we excuse or marginalize their testimony based on our own subjective feelings? We can definitely make a mountain out of mole hill, and if we are imbalanced, then chances are our judgments will be far from balanced.
Resolution:  Lord, it’s very easy to feel like Thomas felt: left out.  But we know he was wrong.  We know you love us unconditionally, even to the point of your own death.  Help us always to have faith, hope and love in you, and to the solemn promise you made to those who follow you:  “I will be with you till the end of time.”   This is faith receiving evidence.  This is God’s Divine Mercy.
Posted by Fr. Alfonse at 4:52 PM