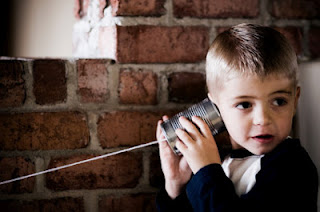 Luke 10:13-16  Listen To Me!
(Click here for readings)
Jesus said to them, “Woe to you, Chorazin!”  Woe to you, Bethsaida!  For if the mighty deeds done in your midst had been done in Tyre and Sidon, they would long ago have repented…Whoever listens to you listens to me.  And whoever rejects you rejects me.  And whoever rejects me rejects the one who sent me.”
Not too long ago, an old man, working at John Paul II High School, told me when he first learned to pay attention.   He had enlisted in the Army and was given a chance at serve in the 101st Airborne Division.
The Army instructor made it very clear to all the young recruits.  “Men, listen up!  Jumping out of a plane is very serious business.  Pay close attention at all times.  Follow instructions carefully.  If you don’t, you could pay for it with your life.”  As soon as he had finished these words, the men saw a plane flying directly above them.  As the instructor continued to speak to them, the recruits were distracted at what they saw.  Ten men had jumped from the plane.  As they were falling from the sky, one man’s parachute failed to open.  The recruits could not believe what they were seeing.   They watched in horror as the soldier hit the ground at over 100 mph.  They witnessed blood and guts splatter and scatter all over the place.
It turned out to be just a dummy.  But it was a lesson he said all the dummies learned and never forgot.
Who do I listen to?  Who will I listen to?  Who will I obey?
The people of Chorazin and Bethsaida rejected the Lord.  Do you understand?  They REJECTED God!  What happens to us when we reject God?  We end up falling from the sky and breaking apart.  We hit rock bottom and fast!  It doesn’t matter how much we have or how privileged we are.  If anything, the weight of our possessions just makes us fall faster!  And the more privileged we are, the more shocked we become!
We all want to be successful in our lives.  But what exactly does it mean to be successful?  That’s an important question.  If you want to live a successful life, then we better know what success means.
Success is nothing more than holiness.  The holier you are, the more successful you are.  What could be more successful than being another Christ?  What could be more successful than life-everlasting?  What could be more successful than being the man or woman you were created to be?
So what does it mean to reject the Lord?  It means to reject His Church.
“Whoever listens to you [my disciples] listens to me.  Whoever rejects you rejects me.  And whoever rejects me rejects the one who sent me.”    Wow!  The Lord definitely stands behind his men, for better or for worse, in sickness and in health, till death we unite.

Say whatever you want.  Say to me that you are a very “spiritual” person but not at all “religious”.  Go ahead.  It means nothing.  Say to me that you believe in Christ but not in His Church.  Go ahead.  But know that what you are saying is not at all what Christ said.  “Whoever listens to you listens to me.  Whoever rejects you rejects me.”
Someone said to me today, “Why should I go to confession with a priest that is a bigger sinner than I am?”  I told that person, “Because he would be very gentle to you!  He’ll probably be able to relate to you better than most others.”
Let's use our common sense.  Is a doctor disqualified for treating patients because he has cancer?  Is a woman disqualified for being a marriage counselor because she is not married?  Of course not!  Is someone disqualified to forgive because they need forgiveness?
What are you trying to accomplish in your life?  Who is influencing you the most?  Is it God?  Is it your family?  Is it your friends?  Is it the entertainment industry?
I’m so sick and tired of hearing Catholic school teachers (and “Nick Junior”) repeat secular old and stale doctrines to our children.  Why do we keep telling children how important friends are when it is their friends that are causing so many of their problems?  Why are we failing to tell our children how important it is to make friends with their siblings?
Think about it.  Why are so many girls confused about boys?  Because they never speak to the first boy in their life:  their brother (or father)!  Today, tell your daughter to ask her brother a simple question:  “What do guys usually think about?”  Do it.  So that she will finally know the secret about boys (and most men).  What do boys think about all day long?  “Uh…nothing???”  Yes, that’s it!  Boys don’t have anything on their mind, and if they did, it would be gross.  The secret is finally out and your daughter finally knows (and has no further doubts about it) that most boys are narcissists and pigs!  She just found out what her friends will painfully find out; that is, that boys don't care much about anyone or about anything!
Why do so many boys have a hard time understanding girls?  Because they never speak to the first girl in their life:  their sister (or mother).  But if they did, then they would finally connect two important dots:  that their sister is actually a girl.  Help them mom and dad!  Why don’t we help them?  Tell your boy to ask his sister what she thinks about all day long.  And the secret will finally be revealed.  He will know that they think a lot more than he does, and that they think a lot about their hair, their clothes, their friends, romance, colorful stuff, etc…  Now they know!
I think the biggest difference between a movie and life is the script.  In a movie people tell you where to go, what to do and what to say.  But in your life, you have the chance to write your own script.  You can determine what you will say, what you will do, and how you will live.  But since no one is an island, you will have to decide who will have the greatest influence in your life.  Who will it be?  Friends or family.  Secular ideals or God’s Word.  School/Country or Church.  My will or God's Will.