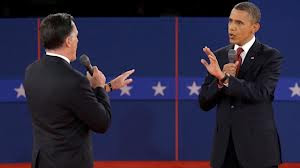 Luke 11:42-46  Do Not Overlook The Obvious
(Click here for readings)
The Lord said:  “Woe to you Pharisees!  You pay tithes of mint and of rue and of every garden herb, but you pay no attention to judgment and love for God.  These you should have done, without overlooking the others.”
I finally had the chance to see a presidential debate.  What makes debates interesting, even exciting, is the fact that the American people demand that two individuals, rivals, who do not necessarily want to speak to each other or even be in the same room with each other, have to confront each other.  That’s a good thing.
I think the build up and anticipation prior to the debate was very exciting.  Everyone was hoping that the President would come out swinging and the Governor would be more charming.   Personally, I was hoping that there would be a fight (verbal punches and knockouts), and there were times when it seemed like it would actually happen, but as soon as tempers flared and politicians became more human, the moderator quickly threw ice upon them and forced them back to their corner, instructing the next zombie to ask his/her question.  I have to tell you that I was disgusted with the “rules” and the “audience”.  No reactions were allowed.  No emotions were to be displayed.  Everyone was supposed to appear as if they had been neutered.  No wonder the audience seemed more interested in how they asked their question rather than in the answer they got.
Although I was pleased with my candidate's performance, the Presidential debates are nothing compared to the debates that Christ went through.  If you think last night was a “boxing match”, then imagine for a moment the on-going debates that Jesus had with the Pharisees.  Wow!  What a match up!  “Woe to you Pharisees! ...You are like unseen graves over which people unknowingly walk.”
Whereas most people do not like to be in the same room with those they do not like, the Lord continually sought out the sinner and confronted him.  He would actually go out of his way and search for him.  That is remarkable!
But what makes the Lord even more remarkable is how well he knows us…and still loves us.
We (and not just politicians) fear being “known” because we fear not being loved.  We fear exposing our defects and sins to others and covering ourselves is a result of it.  When man first sinned, his first reaction was to cover himself up and hide.  Since then, we hide our true selves from people:  our faults, failures and weaknesses from others.  If you only knew me, you would never love me.  So, I must hide who I really am.  I must cover up my scars and wrinkles.  If I do not, then no one will ever love me.
What makes the Lord truly remarkable, what makes Him so unique, is His ability to know us and still love us.  We know Jesus loved his enemies because He continued to confront them.  He did not run from them nor did He attempt to avoid them.
The Lord knows us better than we know ourselves.  And yet, He still loves us and loves us enough to want to help us.  Did the Pharisees hate Jesus?  They did, because they never knew Him.  Did the Lord hate the Pharisees? He did not, because He knew them.  And the fact that He knew them and never condemned them is remarkable!  He prayed that by knowing their heart, they would get to know His Heart.  Did the Lord love them just the way they were?  Of course, but even more…since He never gave up on them!
Politicians do not try to change their opponent’s mind.  They try to change the crowd’s mind.  They are not interested in converting their opponent.  They are interested in beating their opponent.  And because of it, they don’t expose themselves to risk.  They are instructed to be political; that is, deceivingly tolerant and decisively wimpy.  They take more time thinking about how to say something rather than what to say.  They examine poll numbers more than they examine their conscience.  Woe to you Politicians! …You are like unseen graves over which people unknowingly walk.
Was Jesus intolerant or was He tolerant?  He was both.  He was a walking contradiction, Son of God and Son of Man.  He was very intolerant when it came to sin and very tolerant when it came to the sinner.  Although He appeared to be intolerant with the righteous and tolerant with the sinners He was not.  He loved both.  He was a walking contradiction because he loved us enough follow us and loved us enough to invite us to follow Him.
Let’s never overlook the obvious.
Posted by Fr. Alfonse at 11:11 AM