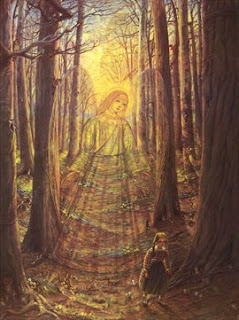 Mt 18:1-10  Guardian Angels
(Click here for readings)
The disciples approached Jesus and said, “Who is the greatest in the Kingdom of heaven?”  He called a child over, placed it in their midst, and said, “Amen, I say to you, unless you turn and become like children, you will not enter the Kingdom of heaven…See that you do not despise one of these little ones, for I say to you that their angels in heaven always look upon the face of my heavenly father.”
This morning, before the children’s Mass, I asked Fr. John if he had a good guardian angel story.
He did.
My mom was pregnant when she suddenly woke up in the middle of the night and heard a voice inside her telling her she needed to go immediately to the hospital.  She woke my dad and they headed straight out the door and to the local emergency room.  They didn’t know what was going on.  She felt no physical pain, but she sensed immediate danger; danger for her unborn child.  The little voice inside her head was relentless:  "the child is dying".  After a few tests, the doctor rushed her into the operating room.  She needed to deliver her baby at once, by C-section, for her child indeed was having difficulty breathing.  In turns out he had pneumonia and would have died within hours if not delivered and treated.
I asked Fr. John which sibling it was.  He said, “It was me!”
At Mass, I told the children that they should all be smiling.  As soon as I said it, they all started to smile.  I went up to one child and asked him why he was smiling.  He said, “I don’t know.”  It figures!  I shouted back, “You don’t know!!!  You should know.  You should all be smiling for the same reason. None of you could smile if you were not…?”  I was waiting for someone to finish the sentence for me.  They said, “Happy!”, “Loved!”
“Yes!  Yes!  Of course!” I said, “but none of you could smile or be ‘happy’ or ‘loved’ if you were not…?”  Finally…one child got it:  “ALIVE!”
“Yes!  Alive!!!”
We all take for granted what we should all be most grateful for.
Angel sent by God to guide me, be my light and walk beside me, be my guardian and protect me, on the paths of life direct me.  Amen!
Unfortunately, we tend to not acknowledge our guardian angels unless they are doing what they are suppose to be doing; that is, protecting us, defending us, and guiding us.  Unfortunately, most of our stories regarding guardian angels are amazingly hairy and scary stories.  I think that’s because we take them for granted and  only notice them when it matters most.
Fr. John has plenty of stories.
I do too.
I used to say this prayer to my guardian angel at least three times a day as a seminarian:  in the morning, at midday, and once at night.  Now I say it every time I get in my car.   I say it because I believe in guardian angels.  I say it because I have experienced the power of guardian angels.
I don’t like to fly.  I don’t like heights.  And I know I have mentioned to you, in previous meditations, my disdain for mountain climbing.  Well, while I was in Northern Italy, our religious community would often go on very long hikes up very high mountains.  What made things worse is that we never wore the proper clothes or shoes or brought the proper equipment for this type of hiking.  I remember passing warning signs that read:  “Bring extra food, warm clothes, proper footwear, first aid equipment in case of severe or unexpected weather conditions.”  I learned to stop reading these signs.  They were depressing.  None of us owned hiking boots, none of us had extra food or warm clothes, and yet we would pass these signs singing a Te Deum and hike up mountains covered in snow and ice.  Just thinking about it today makes me wonder how I ever survived.
Actually, I know how.  It was by God’s grace.  It was by the help of the angels and saints!  It was by the prayers of many!
On most hikes, I was in the back of the pack, with the “slow” group.  That’s because I was the least enthusiastic, the least interested, and the least willing to go and it showed.  But one day, on one particular hike, I decided, for some strange reason, to hike with the “fast” group.
It didn’t take long for us to have inadvertently separated from the “slow” group.  We waited for them but they never showed up.  This was strange since we knew we were in front of them and on the proper trail.  Low and behold, someone called out and spotted them.  They were on the opposite side of us, on a very steep and dangerous cliff, with their hands hugging the side of the mountain.  Somehow they had lost their way and were now walking ever-so-slowly on a ridge that was no more than 3 feet wide.  I couldn’t believe what I was seeing.  My heart went out for them.  And all I could think of was the fact that I was not with them.    All I could imagine was me on that steep cliff.  I would not believe that I was not with them!  I could not believe that on this day, I had decided to do something I had never done before.
Every day we should pray the prayer to our guardian angel.  I believe in its power.  You should too.
Posted by Fr. Alfonse at 10:57 AM